What we learned about running a business in 2016

Im a lot smarter today than I was a year ago. Like a lot smarter. 2016 was a messy, tough, and sometimes a great year for a lot of reasons. Here are some of them:

2016 was a year of learning and growing up at LimeRed. We set out in January with lofty goals, big ideas of transparency and profitability, and a bigger team than ever. On January 8th we introduced L.A.B., an ongoing consulting practice designed to make constant improvement on a business. The goal: To be a better company. And we wrote about that all year. So how did we end up?

Here are the goals from??January of 2016 and the results: 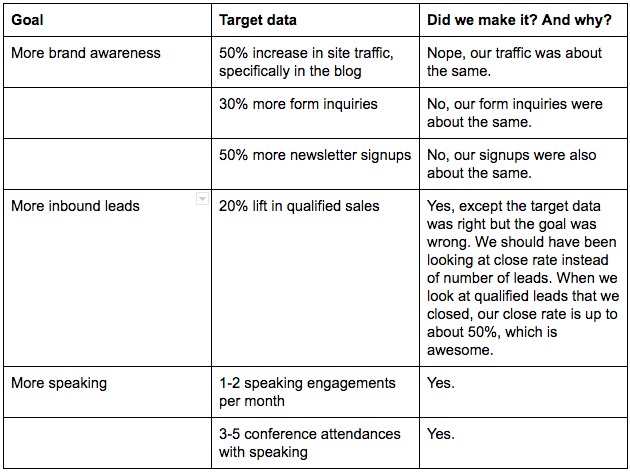 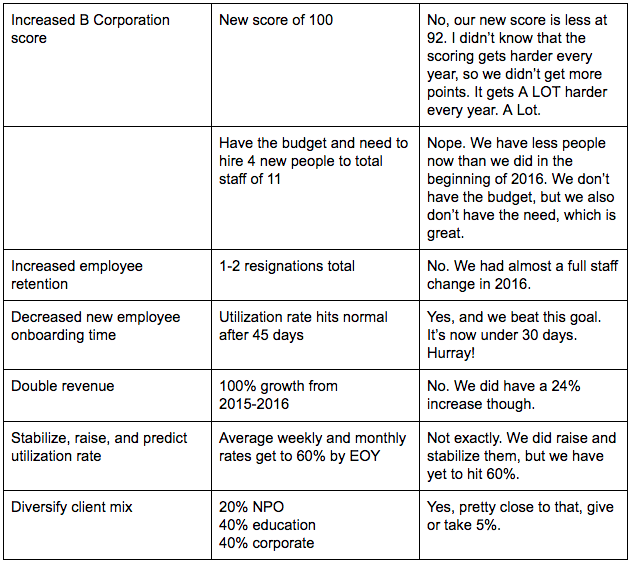 Right we hit less than half of our goals. And I consider 2016 LimeReds best year ever. Why? We learned so much about who we are and who we are not, which positioned us for tremendous growth. Without this process, we would have never been able to do that and we would have been trying to be a company that we are not.

I, for one, have a renewed sense of commitment and joy about running my company that I didnt think was possible after a few tough years. At one point, when I lost two key staff on the same day while Demetrio was out on leave, I seriously considered closing the doors. I thought I didnt have the energy to rebuild the team again. I had to take a hard look at my reasons for doing this and decide what to do.

Since Ive quit every job Ive ever had, I decided to put on my boss pants and double down.

Now, I have more clarity, more sense of purpose, Im better at my job, I know what I need to learn, Ive rebuilt my team into the best team Ive ever had. (Thank you, Linda McCabe.)

The big learning is this: We went about this goal-setting all wrong. We tried to apply an old goal-setting method to a new process. Here what that means: the L.A.B. process is fundamentally flexible and iterative. The goal of it is to make constant improvement on a platform, product, and business.

Our goal should have been, simply: Be a more profitable and ethical company.

Every cycle in our internal LAB, we would define what that means based on our individual roles, set metrics, work toward them, ??then measure and start again.

One of the first learnings we had in our L.A.B. last year was that we had to transition from primarily web development to UX research and strategy. And that change had big repercussions throughout the company:

The goals we outlined initially didnt apply to this new company, and should have been thrown out. By then I had spent countless hours on a staffing plan, a budget, all which were moot. We had to rethink everything, but we still had a lot of work to do to get to that point.

So the rest of the year was spent reformulating and testing new products and services, letting some legacy clients go, restaffing, setting up new systems, working on a new website, and re-learning how we sell and market our work lots of learning and growing.

Heres to 2017, a time for socially responsible companies like LimeRed to lead in their sectors. The change is ours to make. Make it better.