I Hope We Never Go Back to How We Were

I saw this meme going around Instagram that said, “We aren’t working from home, we’re at home trying to work.” And I thought to myself: Yes, but it’s so much more than just that. Maybe for the first time, this pandemic is something that nearly everyone is experiencing at the same time across our little planet. Everyone’s story is the same and different. 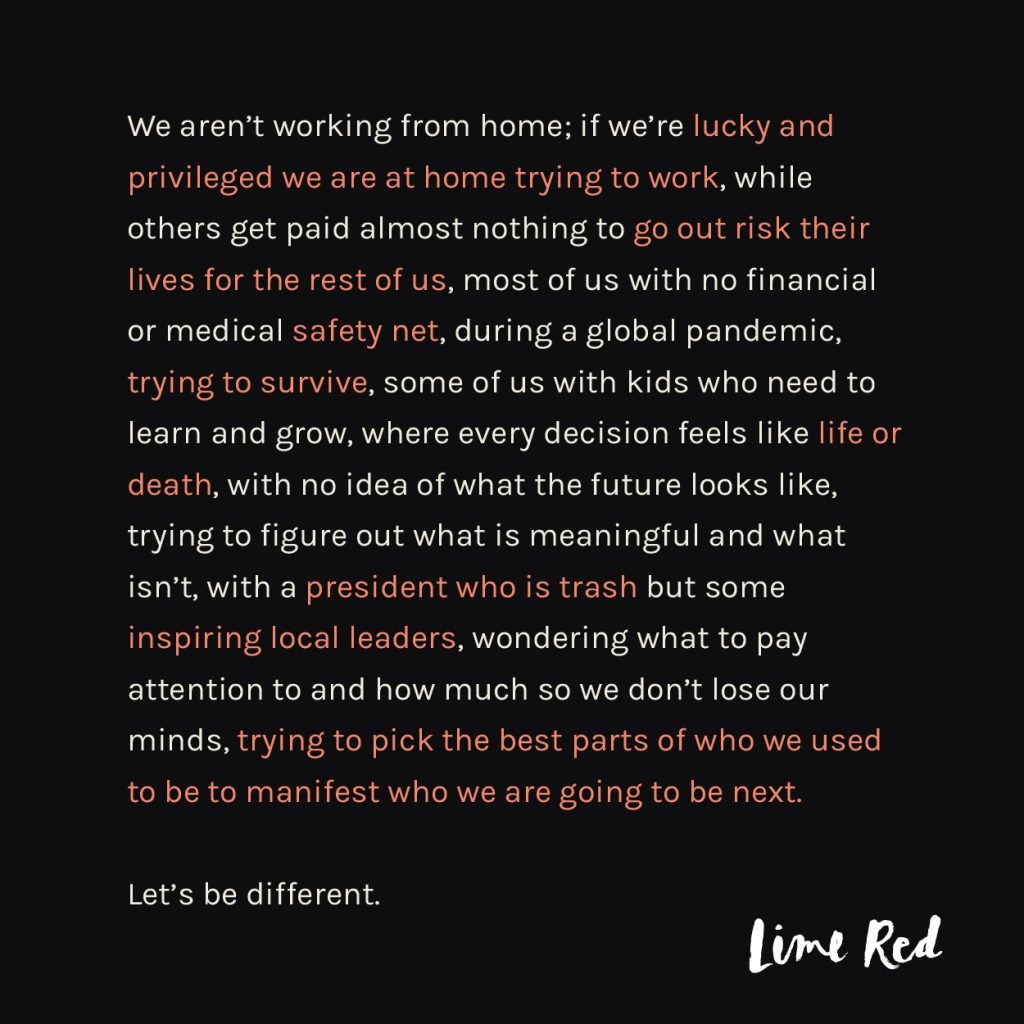 For most of this, I’ve been hunkering down, trying to keep my company, my family, and my shit together. I’ve been telling myself that this is about US, not about ME, and I am just a small speck in the universe; that what I think doesn’t matter on a large scale. Like most things, I’m a little right and a little wrong about that. Yeah, on a global scale what I think doesn’t matter at all. But since we all got stuck inside, my tiny world became the only thing that mattered and I realized how much of an influence I am on that.

I also realized that I don’t have enough mental energy to maintain the large-ish world I created for myself: I’m in 4,593 business groups across the country, I have a meaninglessly large LinkedIn network, I’m friends with people on Facebook I haven’t even talked to for 10 years or more, and I have a large digital footprint. When all this went down I realized that:

It has taken me a while to get my head around all of this and what it means for me, my family, my business, my friends, my network, and the rest of the world. I’ve been so used to thinking big, living in the “what does this mean for the future,” networking with everyone like crazy, and living the hustle every small business owner knows. Now that I’ve had a few minutes to think, I have some ideas on what needs to change.

I’d rather do the things I care about, that are interesting and challenging, and at a small and personal scale than keep up my previous pace. That pace was set by the capitalist patriarchy which I am very much done with because it got us here—fuck them.

Selling at this time felt like a trashy move, even though I have to to survive. It just feels wrong. And when I see others doing it, that feels wrong, too. Maybe it’s because I think about other people who have a way worse situation than I do and I feel guilty about that (so I took a few days off to sew masks and give them away and that really helped my head).

I want everyone who is trying to sell right now to say, “Hey, this is really bad and we don’t know what’s going to happen either. We want to help and we’re doing X and X. Here’s a way to keep us running because when you do, you help X families keep their heads above water. If you are struggling, here’s X and X resources, or just call us. And here are some permanent changes we’re going to make because we realize we are one species on one planet and there really isn’t any other choice: (bullet list here).”

And then they have to do that list. Wouldn’t that just be the best?

Some people are doing this really well already — others aren’t. And once I do have some extra cash, I know who I’m spending it with.

2. Besides the destruction of our planet, the wealth gap is our biggest failure in the last two decades.

I love Instagram—most of the time—and I’ve been spending a big chunk of my downtime on it as a distraction. I follow a few celebrities, too, because they are entertaining or align with my values—you probably do too.

The thing that Instagram does is gives us a peek into people’s lives. Now with everyone at home, we get to see how some of the really well-off life. Before, it was fun to dream what we’d do if we had 4 houses, but now in this reality where we are all losing our livelihoods, dreams, friends, and family, it’s hard to watch one super-rich person interview another super-rich person and have a good laugh and talk about their newfound love of making kombucha with all their newly-freed uptime.

This is the exact opposite for most of us. We are scared, struggling, constantly in an emergency response mode, and we have been ignoring it up until now because we used to be able to buy things to dull the pain. Not so much anymore for the nearly 20% (at the time of writing) of us out of work with NO safety net.

In my daily, regular life now, I’m trying to homeschool two kids by myself, keep a small business going, and try not to completely lose my mind. I can’t think about the future. I can’t figure out a new relationship. I can barely get up the energy to call my family. Everything is expensive and every choice feels like a life or death decision. Almost all of my friends are waiting for the bottom to drop out again. It’s daily heartbreak.

Juxtaposing that experience with rich people on Instagram living out their decadent, carefree, resource-laden, lifestyles have gotten under my skin more than ever before (and it was a lot before).

Equal opportunity and prosperity are myths that we’ve been sold and it’s literally killing us now. People of color knew this before and now it’s WIDE open for everyone to see.

If there’s one thing we need to fix right now, it’s the wealth gap. This wealth was created on our working backs; powerful and rich people built an economic and political system designed to extract resources from the earth, the poor, and the marginalized in order to reaffirm their own position.

All of the cracks in American culture and systems are being blown wide open by this pandemic. All that stuff that only happened to “someone else” is happening to most of us. People can’t afford medical care. Most of us live paycheck to paycheck. We have mountains of debt. Health insurance is tied to employment. We are making less money for more work. If we don’t fix this now, after witnessing the disproportionate numbers of people of color dying,  and the vast amounts of “essential” workers being paid almost nothing to risk their lives, then something is truly broken in us.

It’s time for a revolution.

3. The way to get through this is to focus and get really real.

I don’t know about you, but I work or think about work almost all of the time. Even when I could be playing a game with my kids, I’m thinking about an email or have my phone nearby in case Slack blows up.

This isn’t fair to them or to me. As leaders, we’re addicted to a hustle that is killing us. Why? We love the thrill, we love being needed.

This crisis has shown me that about half of what I do is a “should” not a “must” and born from some kind of obligation that I probably need to talk to my therapist about. What I know for sure is that it’s definitely not serving me to serve everyone around me and ignore the fact that I’m running at a light speed not toward a goal, but away from some really deep fears about the bottom dropping out.

Well, guess what? The bottom dropped out and my kids and I survived. I’m lucky. I’m also really pissed off.

I realized: Most of the hustle I was doing before wasn’t turning into revenue or impact, it was turning into more work. And I’m done with that (see point #1).

It is absolutely impossible to manage a network of thousands of people. It doesn’t work for me because I like individualized work. When you have a huge network to manage, you start thinking about policies, communication, and work in the context of large groups instead of individual human beings.

Every one of us has our own struggle, our own ideas, and our own situation. We have to listen to understand that and individualize. I think we as business owners have stopped looking at individuals and focused too hard on aggregate growth. This is why so much communication sounds so fake. We’ve lost touch and we have too much to manage to really respond with care. I know I can’t do it. I have 94 unread emails in my inbox right now.

Here’s how this operationalizes in a business:

You interact with a business that you think you know well and know you well. You have a long relationship buying from them. Suddenly they send out a mass email with an overly-polished blanket statement or message that feels cold. It feels different, not like you were used to. Somehow the email feels like it went through legal 400 times and all of the soul got stripped out of it. Why? Maybe the sender was scared. Maybe someone put up a wall to protect themselves. Whatever the case, what matters is that you, as a consumer, quickly realized that this business never really thought of you as an individual, and maybe your feelings and situation never really mattered at all.

Conversely, I’ve had some terrific emails from small businesses and orgs that were vulnerable, conversational, heartfelt, brave, honest, and came from a place of humanity. You bet that I did whatever I could to help them because I felt like there was a human sending it to me. I felt I could see them and they could see me. It was personal. And it mattered.

Everything is personal right now.

It’s time for seeing and listening. Let’s stop pretending that we aren’t struggling, or have kids at home who need us, or that working 60/70 hours a week is NORMAL. It’s not. It wasn’t before and it’s not now. We should be making more and working less, but we’re not (see point #2). So why don’t we prioritize quality over quantity? That feels better. Maybe then we’ll get some sleep.

For me, the way through is to cut out everything that doesn’t work. Get down to what matters and make your world small and manageable. Challenge your thinking and what you think is “normal” or “essential” or “right.” Get small and real. That’s where it starts.

You can book a consulting session with me, but I’m going to make you go find the link on our site yourself. I don’t want to sell anything here. I just want you to think about what really matters.

Just think about it.

With lots of love,